Well, I have been following along closely to a project that is on GitHub code-named ‘Flood’

It’s a very promising project and looks to be something that would fit nicely with the QuickBox ecosystem. I have yet to reach out to the author, however, I am sure that he wouldn’t mind the credit and the involved user-base that QuickBox could bring.

This would have an option on your dashboard that will appear just as ruTorrent, Deluge (pretty sure this is coming soon - I am not leading the charge on this development) and now Flood.

The only thing that would need sorting out from this point is the forwarding of the ports on a per user level to redirect within aliases to https://. Since it uses ports, i.e; defaults on http://ipaddress:3000 - it does not support ssl encryption. 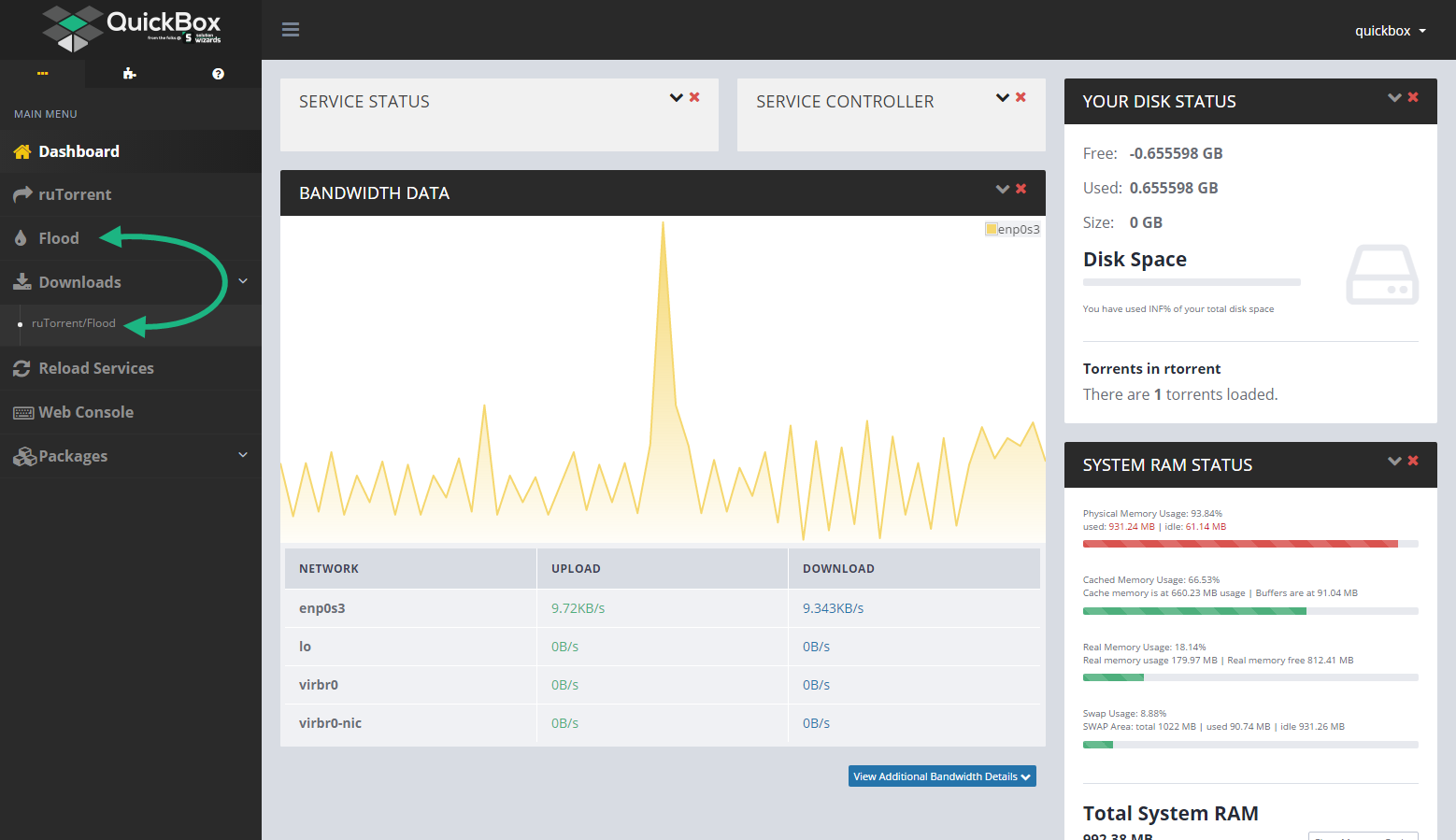 A look at Flood

Flood has a lot of promise, it still is missing a large number of what I believe to be power-user settings, but for those just seeking to add some torrents and use the core of rTorrent, Flood is pretty damn sexy.

A little background on Flood is that is not built from php like that of ruTorrent. It implements a Node.js server for communicating with the rTorrent API, storing historical data, and serving the web UI. This makes it very lightweight and pretty much full of sex appeal. Of course, you will not have to worry about installing nvm and doing the initial setup of npm with the proper versions as the script will handle all this for you.

####Here’s that quick peek at Flood 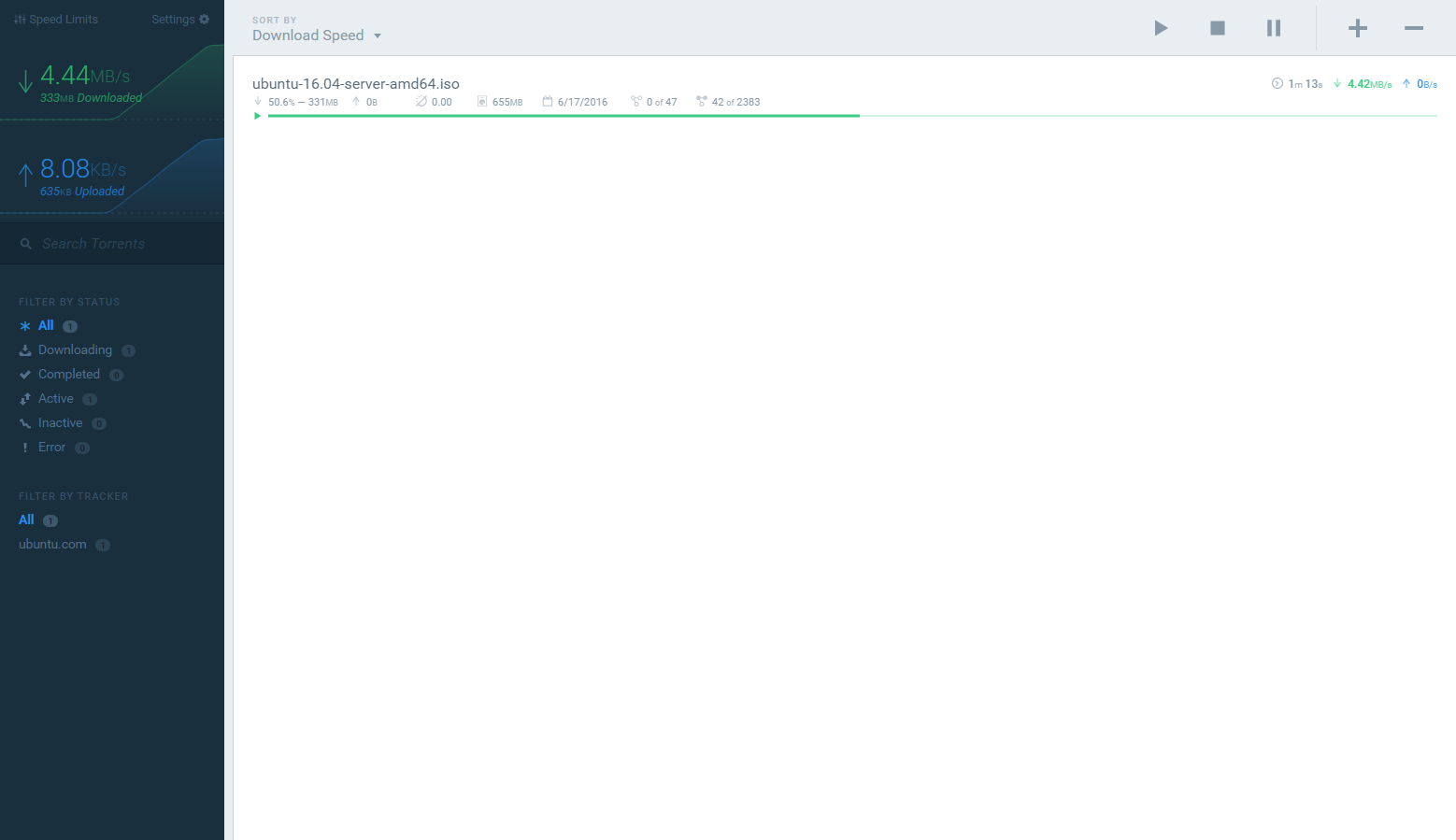 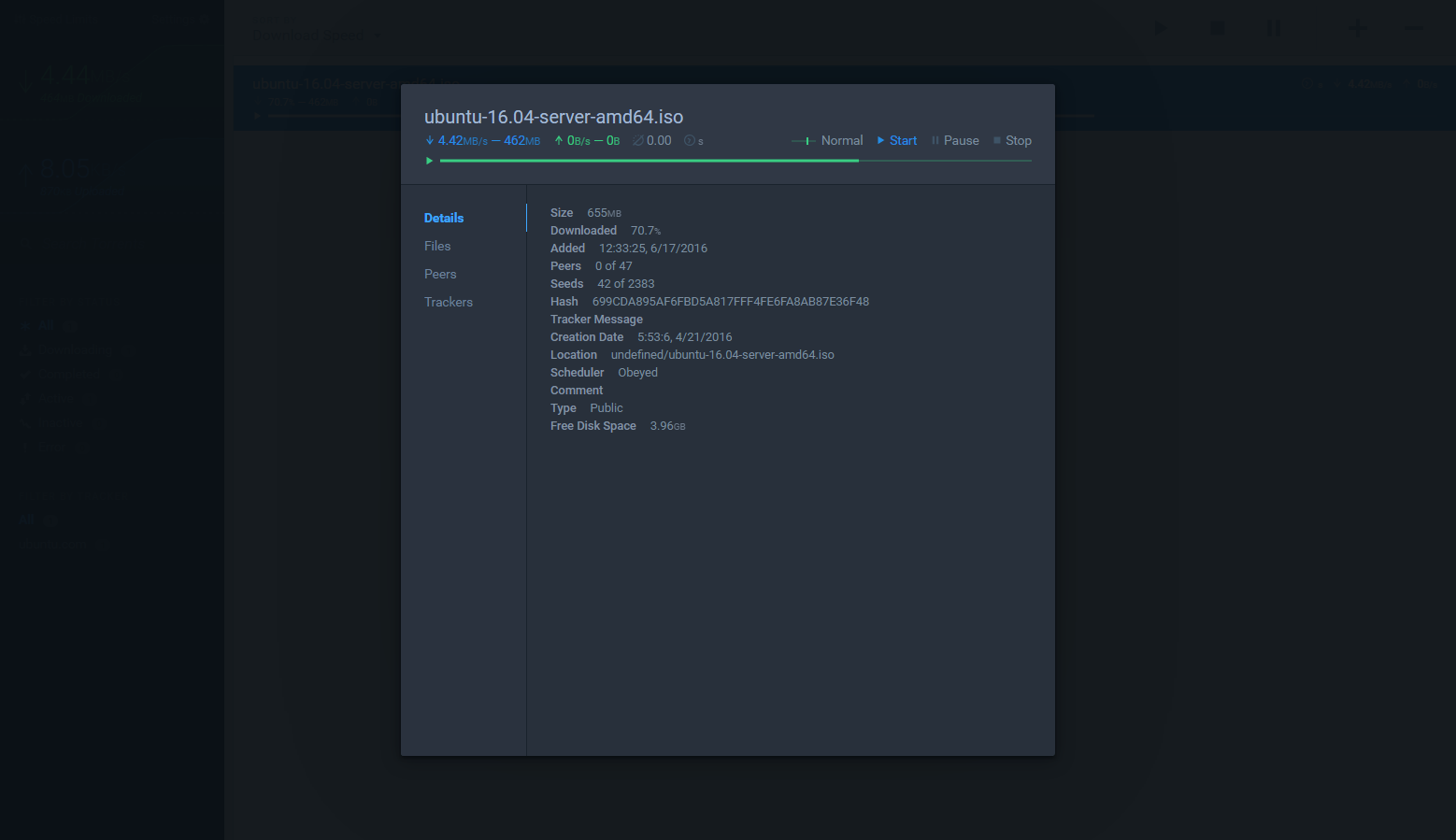 You can check out the author’s repo HERE. Again, I will not officially have this implemented until I gain the author’s attention for approval. However, in the meantime. I would like to let everyone settle on this and think about it… good idea?

Just a quick poll on your thoughts

could be nice to offer a alternative to ru

I completely agree. Just something to keep everyone snug and never bored. I figured instead of a new theme, why not implement a whole new UI.

The only thing that would need sorting out from this point is the forwarding of the ports on a per user level to redirect within aliases to https://. Since it uses ports, i.e; defaults on http://ipaddress:3000 - it does not support ssl encryption.

could this be solved by doing a redirect at dns and or firewall level? maybe

It would more than likely just be a forwarding that would happen within apache itself. So how each user has an alias.conf file in apache, this would just forward it there on a per user level. Also, this gets installed in the users /home directory… thus it is contained safely within their directories.

looking at the creator work I think he could offer a lot to this project.

It looks sleek but way less practical than RuTorrent.

If you will be adding a lot of things it would be really great if you could make the script to ask the user what to install.
It would be nice if it asks before changing terminal outlook for example

It looks sleek but way less practical than RuTorrent.

For now, yes it is, hence my mention of it not being power-user friendly. It is merely another option. Side-note: the more feedback I get, then the better. If it has a resounding “Don’t inlcude” then that is fine as it will be less time we pour into adding another app… which we have a load more on the way… this one literally was a quick work day disctraction

If you will be adding a lot of things it would be really great if you could make the script to ask the user what to install.

The script no longer handles these things on install as this cuts down both interactivity needs with install as well as speeds up installation times. Any install of any package can be handled via your dashboard under the menu link titled “Packages”

When you log into ssh, you should receive the MOD that shows you the available prompts, it uses the default prompt of bash initially, then you can interchange back and forth to whichever prompt you prefer. This is to make bash run much more efficiently and be much lighter in scale.

For anyone awaiting deluge integration with bated breath. It IS coming, I promise! I was in the process of merging the code when the hack at swizards went viral – I’ve been too busy to even look at the code.

If anyone wants to see a teaser of what to expect, there’s a new deluge branch to the qbsetup repo that I’m using as a WIP branch.

hey @liara quick question not sure if its stated anywhere yet but will deluge be for each user or just for the main account?

I think this alternative follow nicely the spirit of Quickbox: Simple et Sexy.
I hope you will set this pretty torrent client soon

would plug ins be a big factor?

Well, Flood is just another GUI to rtorrent, so anything setup within ruTorrent would still be functional. You could use Flood at the same time as ruTorrent without any issues. At the moment, Flood is more of a ‘casual user’ interface, whereas ruTorrent is certainly geared towards power users and those searching out more functionality.

I have still not heard from the author of Flood and have reached out to him on several different fronts. So, this may be a bit before it’s pulled into the QuickBox ecosystem as I do not want to include it as a feature until I have communicated a bit more with him.

It’s a good alternative for rutorrent but yes I’m agree with you it’s not “multi-users” based right? But why there is not just web file to just drag and drop to the theme folder then play with it :D?

how can i get this new rutorrent theme installed on quickbox?

edit: i see the description, all is okay. It looks fine, would be nice to see it in next update

Flood does indeed work nicely, but the last time I tested it there was at least one issue that would cause problems for us: supposedly we can change the outward facing port with a cli option, but it didn’t work in my prior test (maybe about a month ago). Flood defaults to port 3000 which is currently used by Plex requests and will not function if the port is already in use, even if you specify another port.

Edit: taking another look at the project it looks like the previous issue may be resolved. However, a bigger issue appears to be a lack of multi user support. Scgi ports are set in the config and would need to be installed on a per user basis

that is one beautiful UI!! hope to try this flood out in the near future

Any news on this?