Well, it’s about time there is a release for updating QuickBox. This update command has been tested thoroughly on all supported releases of Debian & Ubuntu running versions back to 2.1.0 and is passing. Feel free to update old versions with confidence… this update additionally will not produce downtime on your servers or cause issues with any running processes.

Here is the info on how to update as well as some additional info.

This will fully update your sudoers files, your master database files (that is new, yes), relocate your command code strucutre for QuickBox v2.3.0 as well as add in the rolling update features that are so welcomed here and on into the future.

Here is a quick bit of info on how updating works once you are on v.2.3.0 – and it couldn’t be easier. I will have a more thorough Wiki on this later as well as proper ways to contribute to the code from here on out.

If you would like to test new commits not yet placed within the master branch, you can do so by navigating to the repo you’d like to test and typing git checkout development. This will switch your pulls from branch to branch and thus track the changes from that particular repo. The output will be similar to that of below…

Once you have successfully switched branches, you can now run git pull to pull all known commits within the branch of a particular QuickBox repo. Again, these repos are located at /root/quickbox_[repo-here]. Running git pull on the branch will show similar to that of below (if any additions have been made prior to your initial pull).


Be on the lookout for a thorough Wiki post here in the next few days that addresses in full detail the updating process as well as proper ways of contributing to the code, i.e; templates.

####Also, the QuickBox donation page is live!
If you have the means or the want to do so and would like to contribute to QuickBox without too much hassle, consider dropping a donation our way.

Any contribution, be it large or small are appreciated tremendously as hours and days of work are constantly and continue to be poured into QuickBox and it’s forward advancements (with a whole lot more to come!

So… wanna show us some love?

It should be able to just be installed right on top and run the update. In the tests I did, it didn’t have any adverse affects on the running processes of Plex, ruTorrent, iRSSi or BTSync as it doesn’t touch process.

ok they are off now to start 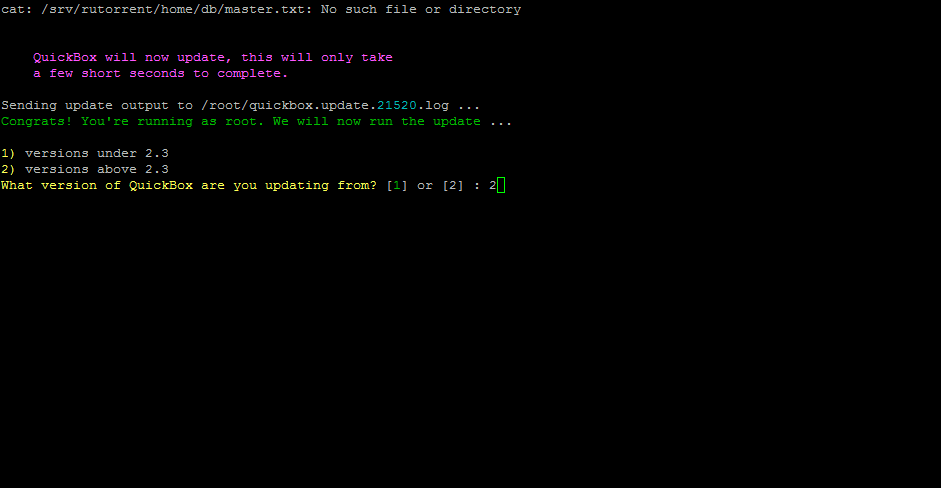 I will work out a way to improve that wording. (I thought that was clear)

0_x that explains the fail 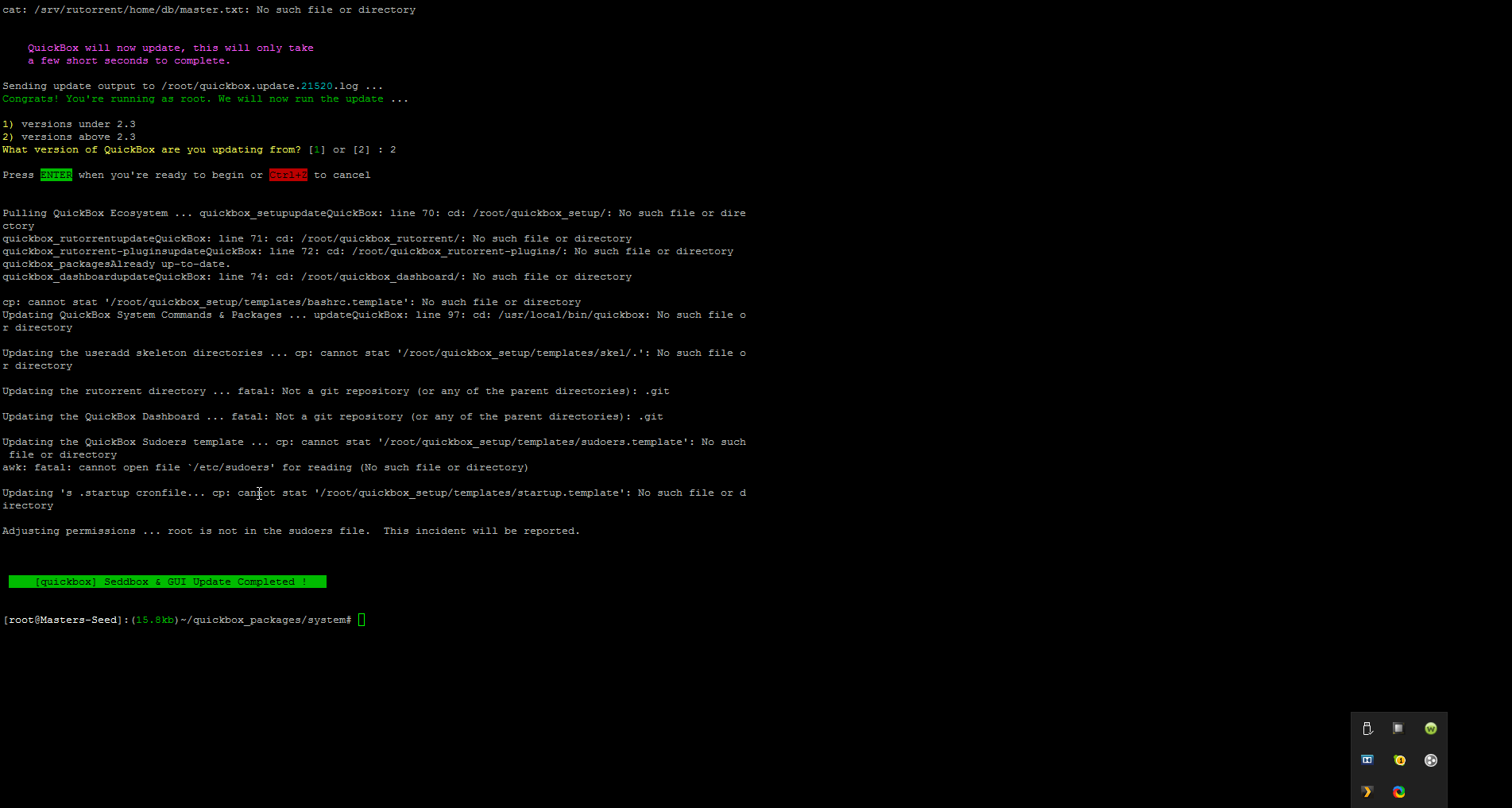 Yeah, I was going to say it’s as simple as just re-running and selecting the proper prompt… I think I will change to verbiage on that first question to “less than v2.3” and “greater than v2.3”

“Greater than v2.3” will accompany all installs running v2.3 and up. So if you have v2.3 you can select that option. Whereas “Less than v2.3” is for anyone running versions under v2.3. (I know, the verbiage is a bit confusing)

There will be a more thorough Wiki post in the next few days that expresses how anyone on versions 2.3 and up can update on a per commit level rather than running an entire system update.

Say the Dashboard receives an update to include Sonarr. You would only have to do something like the following:

This is just a rough example, but that is all a user on versions 2.3 and up would have to do for the update.