I try to update from my Quickbox from 2.3.7 to 2.4.6 (the last version I think) but when I click on “Check for updates”, QuickBox said me that I’m already up to date… 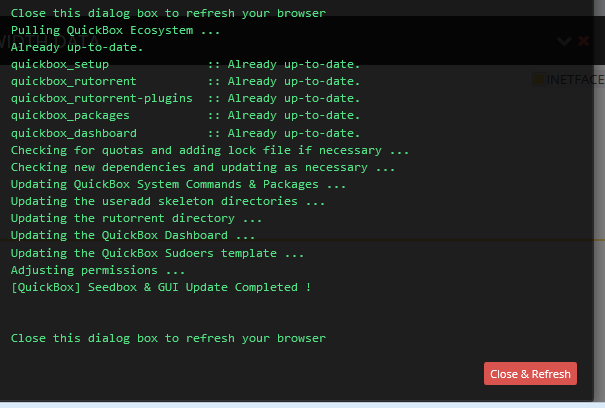 Another bug that I have is, service status appear “Enabled” and after 2sec, it’s “Disabled”, and it change again and again…; (I think it’s just a bug of display because all is good for me for service Plex, rUtorrent and other…)

Thanks for your help !

This is not a bug per se as much as you are using the wrong command. Coming from 2.3.7 to 2.4.6 is a massive leap as version 2.4.0 brought on the use of systemd rather than init. We’ve assumed that everyone had made the leap by now and have not posted these details anymore

Try the following (as root):

Once you have rebooted your machine you may want to run your updater once more and check to see if the version matches our current v2.4.6

###Additional to note (and this is very important)
In version 2.4.0 we have opted to use a cleaner directory tree for easier recognition of RTorrent vs. Deluge torrents. See the following post for the full set of details.

:tada: After several longs weeks it's finally arrived, QuickBox version 2.4 has hit public repos for download and update officially as of yesterday (07/07/2016) :tada: This update is a massive overhaul from 2.3.7/8 versions. Here is an outline of what is different and some of the things you will need to do in order to catch up your system. :mega: Heads Up! Since this is such a big overhaul there are some additional steps that you will need to perform manually to get your QuickBox in the s…

Thanks for your answer ! I followed you article quoted bellow, and now QuickBox is updated

ve you for beeing a QuickBox user