Can I upgrade to Ubuntu 18?

Are you maybe sitting and wondering if you can safely upgrade from Ubuntu 16 → Ubuntu 18?

I was having exactly the same thought and why not give it a go!

For starters not all server setup are equal but my base was a:

Before you start give some thought into this - could I simply uninstall the app before upgrade?
It will save you some time for the upgrade process!

I would remove Netdata, Ombi, Syncthing and Tautulli if I had to do it again!

Before upgrading to Ubuntu 18.04, you should first update the current 16.04. It’s recommended to update/upgrade all installed packages before upgrading. To update Ubuntu, connect to the server and run the commands below:
sudo su -
then
apt update && sudo apt dist-upgrade && sudo apt autoremove

Confirm that the Prompt is equal lts

If not, change it to lts and save the file.

Now that your system is ready, run the commands below to begin Ubuntu upgrade to the latest development release…
do-release-upgrade -d

Just follow the instructions!
Mine stopped as I had to fix:

Once fixed the upgrade process will start - be sure to answer N to the questions about keeping configs. Keep the originals, do not change them!

And yes do remove obsolete files when asked at the end.

The goal to get qb fix version complete without any problems/warnings preferably.

So I started out going for a:
sudo su -
then I saw this screen:

Just to be sure I had no leftovers:
apt -y autoremove && apt -y autoclean
then
apt -y update && apt -y upgrade
then
qb fix dpkg (Yeah using already in place tools to make sure I have no dpkg locks messing up stuff
then
apt -f install mysql-server --reinstall
this fixed the mysql issues I was seing

Then to make sure we still have a woking mariadb this needs to be done:
curl -sS https://downloads.mariadb.com/MariaDB/mariadb_repo_setup | sudo bash
apt -f install mariadb-server --reinstall

Then I did actually ran qb fix version

Grafana was missing so I used qb install grafana

then nginx was not happy due to the fact it tried to fire up a UB16 version!
so I added a UB18 config for it:

Pastebin.com is the number one paste tool since 2002. Pastebin is a website where you can store text online for a set period of time.

then this one spooked around: 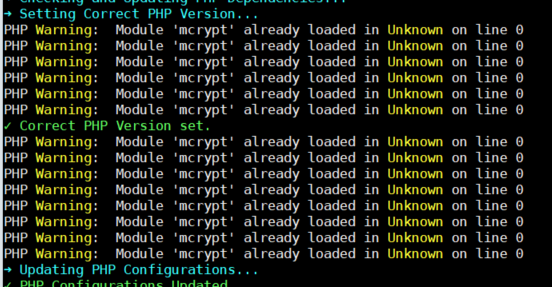 nano /etc/php/7.3/cli/php.ini
and remove the mcrypt.so duplicate entries at the bottom!

Then I had a complete success running:
qb fix version

My rtorrent was dead and so was plex!

Plex was fixed by doing these steps:

This example uses the current link for Ubuntu, at the time of writing. Be sure to use the up-to-date version supplied on the Plex website.

Or simply download to your machine and then ftp up in the root folder!

I haven´t had the chance to verify if this was the fix:

lastly this one came up as I was fixing duplicate entries in the Lock table via phpmyadmin:

This was a rundown of my upgrade to Ubuntu 18.

Not that it is an official “we support an upgrade” but just showing its not as frightful as it may sound and you shouldn´t be scared of taking up the task!

With what a little more than a year until dropping security patches and all that for UB16 it is more than likely we will drop support for it at some point.

Feel free to comment or try it out on your own risk but there´s a lot of users on Discord that would be able to help out answering questions related to this.
But don´t expect that an answer can be found straight away as people have different kind of set ups, hosts and kernels so things might or might not be straight forward.

I tried out on a vm box then took on a live box.

ps. spelling or grammar errors are free of charge